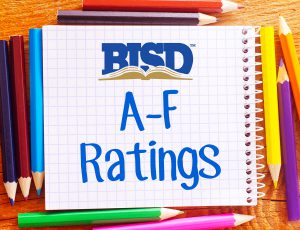 On Friday, Jan. 6, the Texas Education Agency (TEA) will release provisional A–F ratings for districts and campuses based on data from the 2015–16 school year as required by HB 2804 passed by the Texas Legislature in 2015.

While Birdville ISD believes that schools and districts should be held accountable for providing the highest quality education for students, we encourage parents and community members to use caution when interpreting these provisional A–F ratings for the following reasons:

Although an A–F grading system seems simple and understandable to most people, the calculations needed to determine each letter grade are extremely complicated and lack transparency. In fact, TEA did not release information to districts on exactly how the calculations were to be made until December 16, 2016. Therefore, it is recommended that parents and community members keep in mind the work-in-progress nature of the A–F rating system.

Regardless of the new labeling system, we have high standards in Birdville ISD. The new system will inform us, but it will not define us. Plans are already in place that continue to make us an innovative district that is responsive to the needs of our students. In addition, it is important for us to continue to tell our story of excellence every chance we get.